Populist politics, anti-vaxxers and Russian trolls: Why measles is back

It’s the most infectious vaccine-preventable disease and it’s sweeping the world.

Measles transmission has quadrupled in a year, according to the WHO, with 170 countries reporting 112,163 cases in the first three months of 2019.

Not only is measles exploding in traditional hotspots — Africa is up by 700% — but Western countries are seeing the most widespread outbreaks in decades.

Australia, despite a declaration of measles elimination in 2014, is experiencing its biggest outbreak since 2012, with 113 notifications in the first four months of this year and an unprecedented number of public health alerts.

Many outbreaks in Europe and the US have been fuelled by vaccine-refusers in a climate of disruption in politics and distrust of mainstream medicine.

In Australia, most cases have been in undervaccinated adults and adolescents, of whom there is a cohort born between 1966 and 1992 who received only a single dose. Among the cases this year, almost half have been in young people aged 15-30.

Professor Raina MacIntyre, head of the biosecurity research program at the Kirby Institute, UNSW Sydney, warns that measles is “an imported disease but one that can easily set off an epidemic”.

“The typical case is someone who is from overseas or who has travelled and brought it back. Then they go and sit in the emergency department, and wait for hours and hours.”

A person with measles returning to a community with low vaccination rates can be the match that sparks a fire. In the US, most cases have been imported from Israel, triggering outbreaks with hundreds of cases in ultra-Orthodox Jewish communities in New York.

In Australia, the majority of cases have arrived from Asia, including from the Philippines, which is experiencing one of the worst outbreaks in the world, with 34,000 cases and 466 deaths, mostly in children, since January.

Immunisation researcher Professor Julie Leask, from Susan Wakil School of Nursing and Midwifery at the University of Sydney, says there are concerns about the potential for outbreaks in areas of Australia.

This is particularly true in the NSW Northern Rivers and Byron Bay regions, where vaccination rates in some towns are below 75% and there are clusters of unvaccinated children in informal childcare arrangements in response to recent federal and state government policies (see box below: ‘No jab, no pay’ — is it effective?)

However, Professor Leask stresses that adolescents and adults who have not had the recommended two doses of vaccine pose a more significant public health risk.

“If you are a GP faced with vaccine refusers, it will be a big part of what you are doing, but globally it is not the largest cause of low vaccination. The solutions are travel vaccinations and increasing access to primary healthcare.”

This year, the WHO included ‘vaccine hesitancy’ in its top 10 threats to public health.

“These are more of an enemy of immunisations than hesitancy. Hesitancy is not behaviour, it is a state of mind and the behaviour is refusal — so hesitancy is a misnomer we are trying to get away from.”

In Australia, television chef Pete Evans and One Nation leader Pauline Hanson are among those who have spouted anti-vaccination views.

And in the US, its proponents range from environment lawyer Robert Kennedy Jr, who has campaigned for Barack Obama, to Texan Republican Jonathan Stickland, who infamously branded immunisation as “sorcery”.

In a recent Twitter argument with vaccinologist Professor Peter Hotez, from Baylor College of Medicine in Houston, Mr Stickland summed up a growing sentiment in the West when he wrote to Professor Hotez that “parental rights mean more to us than your self-enriching ‘science’”.

New #vaccine exemption @TexasDSHS numbers tell much of the story. I’ll tell the rest: Children of #Texas have been placed in harm’s way for the financial gain of special & outside interest groups. Calling on our TX elected leaders to say “NO MAS” and stand up for our children! 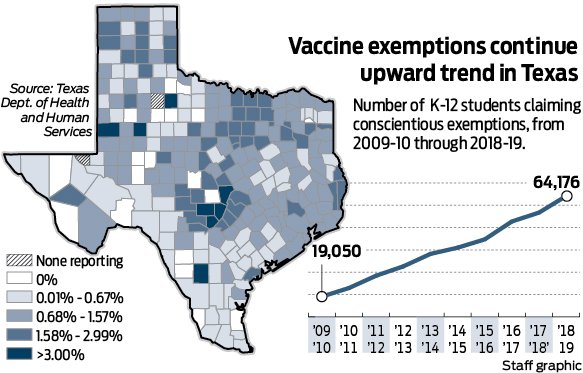 You are bought and paid for by the biggest special interest in politics. Do our state a favor and mind your own business. Parental rights mean more to us than your self enriching “science.” #txlege

Celebrity criticism of vaccination has also been influential in the US where discredited former UK doctor Andrew Wakefield, author of a since-retracted 1998 Lancet study linking MMR vaccine to autism, courted Donald Trump during the presidential race.

Some political commentators have noted that an anti-vaccination stance has become increasingly common among Republican officials.

“When Donald Trump came out in favour of measles vaccination [in April], it was a good thing for tipping the ideological gradient back,” Professor Leask says.

“There will be ways of thinking along the Left and the Right that justify a vaccine refusal position. The Right will say that ‘the government shouldn’t be interfering in my liberties’, while the Left will say ‘this is not organic and natural and I don’t want Big Pharma saying what will go into my child’.”

Dr Margie Danchin, a paediatrician at the Murdoch Children’s Research Institute and Royal Children’s Hospital in Melbourne with a special interest in vaccination, says despite media coverage highlighting affluent areas where vaccine coverage is low, it is an issue that affects both the very top and the very bottom of the socioeconomic spectrum.

“There is a cognitive dissonance among those people who are well educated and who may well have a science background who are choosing not to vaccinate or only partially vaccinate,” she says.

“But for those in very low socioeconomic groups, vaccine coverage is also low. For these people, it is more practical barriers such as family size or difficulty getting time off work. They are also disproportionately affected by policies that restrict family payments or childcare access.”

Dr Danchin warns that while it is mostly young travellers bringing the disease back to Australia, it is young children, especially the under-fives, who develop the most serious illness and are at the highest risk of complications such as pneumonia and encephalitis.

For every 10 unvaccinated people exposed to measles, nine will contract the disease. One primary case causes up to 18 secondary cases, she says.

In children, however, 99.9% of those who are exposed and unimmunised will contract the disease.

Here’s what happened when codeine was made prescription-only

Help us support our community

Why full-fat milk is back in favour

Dave’s long road to faith and finding a miracle